The Hydra is an early Hardmode Boss and is the first boss recommended to be fought before the Mech Bosses. It focuses mostly on the summoning class.

While The Hydra is alive, the music Beast of Three Heads will play.

The Hydra does not spawn on its own and it is summoned using Hydra Food.

The Hydra starts with 3 heads which will periodically attack the player.

When one of the heads is killed it will split into two and reduce the body's health by 1. The body has 12/15 health which goes down whenever a head is taken down.

After the Hydra is defeated, it will fly away from the player, and as soon as it despawns, it drops its items. 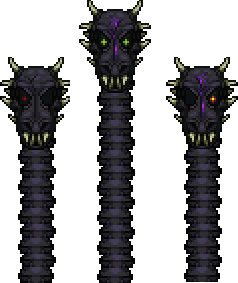 The Hydra Heads have two attacks: