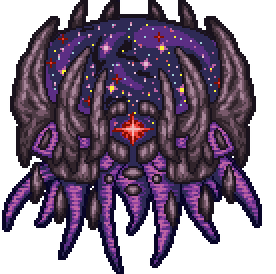 The madness that has befallen my race is no mere plague. It is the work of something sentient - or at least something once sentient.

The Mind God is a post Moon Lord Boss and is the current final boss of Pinkymod.

The Mind God cannot spawn on its own and is only summoned by using one Dissonance, Solar Fragment, Vortex Fragment, Nebula Fragment, and a Stardust Fragment and then using a Dark Ritual Piece at a Dark Ritual Table.

The Mind God has several attacks which it will us randomly during the battle:

At 40% health The Mind God will enter its second phase ceasing all its previous attacks except for summoning walls of Dream Sigils, small dream Sigils and becomes invulnerable while summoning a swarm of Intangible Cells that chase the player.

Once all the Intangible Cells have been destroyed The Mind God will enter its final phase resuming its previous method of attack with increased speed and frequency along with some new abilities:

These message will appear randomly during phase 3:

Ancient being of utter and absolute powah. One of the living Presiding Gods, and dominator of the Mindscapes. The Mind God is said to had experienced human emotions before, unlike all other Presiding Gods save for a few, and because it is the lord of mind, it was most drastically affected. After bonding with a Terrarian who was later sacrificed and killed in 'it's honour', it slowly started descending into a abyss. It was from the Mind God that the warped realm known as the Void was born. Of course, the Mind God was the first victim of it's new creation, but it was not the one most altered. Sure, it went insane and all that, as is the fate of anything the Void has sowed it's seeds into. But the Mind God is still a god, and after all those years, no matter how much power it has lost and no matter how much of a husk it is of it's former self, it still has a spark of life within it. This spark is it's devotion to his former bond, the Terrarian, and it is what is preventing him from becoming the Void Incarnate and retaining a tangible form.