FOR YOU MY PEOPLE I WILL TAKE FLIGHT, SO THE SUN CAN RISE AGAIN

The Sunlight Trader is a Pre-Hardmode Boss fought after Queen Bee in the Desert Town of Eitd. 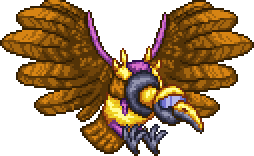 The Sunlight Trader and his mount cannot spawn on their own and only can be summoned with a Sunswept Egg in the Desert Town of Eitd.

When the mount is alive, the Sunlight Trader is immune to damage, and follows after the player while throwing spears, and sending discs that follows the player for a bit until they disappear.

The Mount attacks with the following:

At 50% health The Sunlight Trader will empower his spear and bow causing thrown spears to glow orange, deal more damage and inflict On Fire! while his bow will occasionally fire slowing moving sand balls along with his normal arrows.

Giant mutated vulture. It is of an unknown subspecies, but boy is that Sunlight Trader lucky to get one of these guys as his pet. I would love to ride the skies on the back of a firebending bird of death. This magnificent creature I admire alot, the armor the Trader made it wear weighed at least half it's weight, yet it could still fly and fight. And it's utmost loyalty and devotion, even til the second of it's death, it remained the companion of that Trader. I cannot imagine how long the Trader had spent with his bird, for a creature to develop such close connection with another outside their race. It is unprecedented. Perhaps it was under magical influence? Perhaps it was enslaved or forced into submission? No. These can't be. The creature was wholeheartedly and truly a faithful beast. It has gained my respect. A giant bird is more trustworthy than thousands of men fighting in the Great Desert for control over the land and ultimately personal wealth. And yet we call ourselves more intelligent...

The Sunlight Trader. Appears to have no name, not that I can discern one anyways. In fact, Sunlight Trader is simply the name given to the indigenous, hooded merchants that travel from desert town to desert town, peddling their wares. They follow a very strict code of conduct. This includes a no-interaction policy. By right, they are not allowed to help or hinder others, and the only interaction they are permitted to do is amongst themselves and when trading with others. Yet this Sunlight Trader... he violates all of these codes. At the rate he is going, I am certain he had been expelled from his clan and all others long ago. He isn't so lonely, though. That giant bird still flies with him wherever he goes.

I'm not quite sure about his motives. He seems to want to bring justice to a land that is notorious for being unable to keep law for more than a year. He wants peace, based on those writings, yet he takes up spear and bow and draws blood in order to achieve it. Surely he knows how ironic it is? Or perhaps I am not seeing something, maybe that's the only way he can move on in life? I don't know, I really don't. And he won't speak a sound too, not even a grunt when being sliced at. I guess we will never know some things...