Heart of the Cavern

Heart of the Cavern 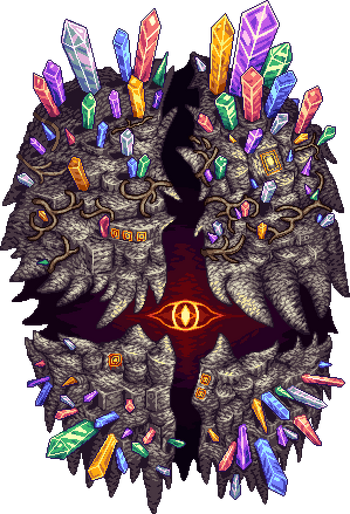 "A roar can be heard from the caverns above..."

The Heart of the Cavern is a Pre-Hardmode Boss fought just before the Wall of Flesh.

The Heart of the Cavern cannot spawn on its own and can only be summoned by right-clicking the Sacred Crystal found at the bottom of the Sanchon Mining Facility with the Crystalline Wayfinder in your inventory.

The Heart of the Cavern willawaken, opening its eye and floating down to the center of the arena. The Heart will fire gembolts at the player in various patterns indicated by the runes present on its orbiting sigillites. On top of this, the main eye itself sometimes begin to charge a massive sweeping prismatic deathray in the direction of the player indicated by a trail of crystal dust.

Ancient cavern diety. I have read about it in my books back in the day when that was my forte. The Heart of the Cavern, known by many other names such as Rock of Plenty, Bringer of Fortune, the Cavegod, Father Illuminator and so on. If the legends are true, it was created by none other than the Moon Lord to answer the prayers of his cultists, to shower them with unlimited wealth. But you know, religious figures seeking unending wealth never ends well. A unspoken tragedy occurred, ending with the Heart being buried underground deep within the ranges of Sanchon Coast Mountain, supposedly. As for those cultists... Only one lived to pass the tale on. I wonder if the Medium knows anything of them, heh.