The first fight consists of a battle against Ophiopede and Ophiofly. The fight can be initiated after Golem has been defeated.

The Second Fight can be summoned using a

Infested Compost. Location and time of day does not matter.

The Ophiopede rematch is very similar to the first fight, but Ophiopede has more HP and deals more damage.

During the fight, the song Metamorphosis will play.

In phase 2 The Boss will use the following attacks and all previous attacks: 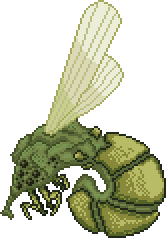 After the Ophiocoon has been dropped on the ground, the Ophiofly will spawn. The Music will change to The Fly