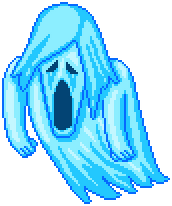 The Spectre is a Hardmode enemy that spawns rarely in the Post-Plantera Dungeon. It uses soul-based attacks against the player. When the spectre dies, it will release nine Dungeon Spirits.

The Spectre's first and most basic attack is the Soul Arrow. It's telegraphed by the Spectre putting its arm over its mouth. It's a simple projectile with homing capabilities.

Its third attack is Soul Spear. It raises its arm and charges for longer than with Homing Soulmass. It fires a large projectile towards where the player is going to be. Make sure to change direction when it fires to avoid getting hit.

Its fourth attack is Soul Greatsword. It raises its arm and summons the Soul Greatsword before swinging it downwards. Be quick to dash out of the way as this attack is very damaging. Don't be afraid to dash through the Spectre itself if that means avoiding the greatsword.

Its fifth attack is Focus Souls. It raises both arms and slowly conjures the spell in front of it. Run behind the Spectre to avoid the beams.

The spectre's attacks reference sorceries from the Dark Souls franchise.