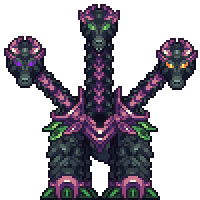 "You hear hissing somewhere nearby..."
The Hydra is a Pre-Hardmode boss fought in The Mire biome. She serves as an alternative to The Broodmother, the Eater of Worlds, and the Brain of Cthulhu, so that the player may obtain Abyssium and Hydra Hide.

The Hydra doesn't spawn on her own, and requires the player to summon her using the Hydra Chow while in The Mire biome during the Night. Alternatively the player can smash three Hydra Pods.

The Hydra's body has 9999 defense, so attacking the heads is almost required. Once all her heads are destroyed, she will die.

For more elaborate strategies on defeating The Hydra, including weapon and arena recommendations, see The Hydra Strategies.