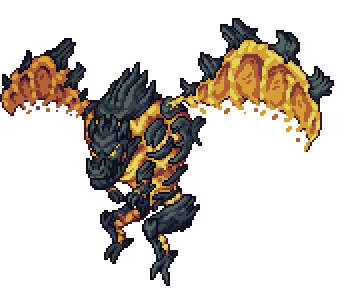 The Broodmother is a Pre-Hardmode boss that is an alternate to The Hydra fought in progression. Although its size, appearance, and placing in the boss progression make this boss seem to be one of the most menacing in Pre-Hardmode, this boss is considerably easier than the other three bosses that would normally be fought at this rate.

The Broodmother can always be fought in the bottom of the The Inferno's volcano, and does not require much terrain preparation whatsoever. However, it is recommended that the player, if need be, should place down a campfire and heart lantern in the bottom of the volcano, alongside a few platforms, or even rope.

The Broodmother will always remain above the player on either their left or right side, and will never intentionally ram into the player. The Broodmother makes up for this, however, with multiple varying ranged attacks, and the ability to spawn in minions.

The Broodmother is able to fire out exploding fireballs, the explosion of each having a moderately large radius. To counter this, if the player is in the volcano's bottom, hide under the "floating island" that looks like a mouth on the mini map. If the fight takes place on the surface, just run in the opposite direction of the Broodmother.

The Broodmother will try to scorch the player with a flamethrower attack from their head, which can ignite them. Again, to counter this inside of the volcano, hide under the "mouth." If the fight is on the surface, do the same thing as you would do with the fireball attack. Occasionally, The Broodmother will make flame geysers burst from the ground. In both fight scenarios, the player can simply stop moving, but should be prepared to jump, just in case.

Finally, The Broodmother will throw out multiple Dragon Eggs. Like Mothron's Eggs,after a certain period of time, the eggs will hatch, spawning in Broodminis. To handle the Broodminis, shoot them until they die.